In the accompanying podcast, MMN columnist Bruce Rosenstein introduces new readers to the world of Drucker, and why he is considered the "founder of modern management." Below, he recaps Drucker Day 2017 and 7 timeless takeaways from the global event. 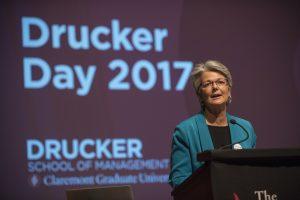 Shortly before the holidays, I attended this year’s Drucker Day (November 4) at the Drucker School of Management in Claremont, California, part of the Claremont Graduate University. The event attracted more than 400 alumni, students, faculty, staff, and friends of the school. The theme was “The Peter Drucker Path: Past, Present and Future.”

I’ve attended (and sometimes participated in) a number of these events, and have written about them, most recently at Drucker Day 2015. The morning keynote this year was by Renée Mauborgne, a professor at the business school INSEAD, and co-author (with W. Chan Kim), of the major bestseller Blue Ocean Strategy and the just-released Blue Ocean Shift: Beyond Competing – Proven Steps to Inspire Confidence and Seize New Growth.

Another major segment was the Lifetime Achievement Award, given to Joseph Maciariello, author of such books as A Year With Peter Drucker, and Drucker’s Lost Art of Management. He is currently Marie Rankin Clarke Professor of Social Science & Management Emeritus at the Drucker School. He was a longtime friend and collaborator of Peter Drucker’s, and was the first person I interviewed in Claremont, in 2002, for my first book, Living in More Than One World: How Peter Drucker’s Wisdom Can Inspire and Transform Your Life.

1.    Get back to first principles. Drucker taught that you can’t successfully move into the future unless you understand your present reality. A powerful statement came during a surprise element: the unveiling of an eerie and otherworldly, and highly effective “holographic effect” of Drucker speaking about his principles of teaching, consulting and writing about management. The theme was also prevalent in Professor Jean Lipman-Blumen‘s presentation “Leadership For What?”

2.    The Drucker spirit is alive and well. This was a pervasive idea all day. In particular Elizabeth Edersheim, author of The Definitive Drucker, gave a great overview of Drucker’s contributions to management, and how his ideas continue to influence everyone from Google and Amazon to lesser-known entities like UltimateGuitar.com.

Drucker School professor Bernie Jaworski, who holds the Peter F. Drucker Chair in Management and the Liberal Arts, led a lively panel session on “Examining Drucker’s Principles for Today.” Students get a strong foundation in Drucker studies through his classes “Drucker Practice of Management,” and “Great Books of Drucker.”

3.     The future will be interdisciplinary. Professor Hovig Tchalian presented about the Claremont Game Lab, based at the Drucker School but open to students from any of the Claremont Colleges.  Creating successful games involves creativity, and multiple skills in business and various technology areas.

4.     Creating wins over competing. This was a major theme for Renée Mauborgne; if you create and execute on something really new, different and useful, you create space for yourself that did not exist before and that others can only try to enter.  Creativity is a huge part of the Drucker School experience, especially in preparing students for leadership roles in the creative economy.

As it points out on its website: “Creative industries range from software design to entertainment, fashion, and the arts, and they are the single largest growth segment in Los Angeles and California.”

5.    Observe and perceive what’s really there. (Not what you want to see, or mistakenly see.) This was a theme in Professor Jeremy Hunter’s presentation, “The Zen of Drucker: Mindfulness and the Practice of Self-Management.”

I’ve known Jeremy since my first visit to Claremont in 2002, and I wrote about him in Create Your Future the Peter Drucker Way. He showed  that once you become hyper-aware of what comprises your life and what physical and mental spaces can be created, you are more likely to make personal and professional breakthroughs.

6.     Be open and receptive to new information and experience. Besides new initiatives like the Game Lab, there were also presentations on topics that were presumably not on everyone’s radar, such as “Disruption in Children’s Linear TV,” by Emily Arons, a Game Lab mentor and Senior Vice President of International Business at the Pokémon Company International; and “Can Augmented Reality Save the {Shopping} Mall?” by Wanda Gregory, also a Game Lab mentor and Director of the Digital Technology and Culture Program, Seattle University.

In Deborah Clark’s afternoon keynote, she emphasized that in order to thrive in the future and to carve out a unique space in business media, Marketplace must continue to evolve beyond being thought of only as a radio show, but also as a continuous source of information via its website and social media, including video content.

7.    Face to face networking is essential. Undoubtedly everyone at Drucker Day is involved in some form of online networking. As valuable as that is, there is nothing like an event in which diverse people are brought together with lots of opportunities to meet and interact with each other (aided by food and drink). Drucker was a champion networker, in an era when face to face was the main option.

Jenny Darroch, (who appears in the featured image for this article) who became Dean of the school last December and has been a professor there since 2004, emphasized how it continues to be built upon Drucker’s core principles, yet with a clear-eyed sense of current organizational and societal realities, and how students can become the leaders of tomorrow.

To get a further idea of the work she and her colleagues are doing, read several of her posts for HuffPost: “The Drucker School of Thought: Distilling Drucker’s Work into Five Key Principles;” “How to Manage through Change, the Drucker Way: Where are the Change Leaders?”; and “You Have Your Liberal Arts Degree: Now What? The question parents of recent grads are probably asking this summer.” The latter in particular should be consulted for her listing and explanation of six areas young college graduates should master to be ‘job-ready.’

It’s only fitting to give Peter Drucker the last word. In the “holographic effect” segment, an interviewer observes that a lot of his principles seem like common sense. “All of it is common sense,” Drucker responds. “That’s why it’s so rare.”

Gallup's Jim Clifton on Entrepreneurship and Millennials in the Workplace: Part...
2016-10-28
By Elizabeth Edersheim, Ph.D.
< >