More than three decades later, Drucker's commentary on everyday challenges that executives face is worth revisiting.

These are all hot button topics today. They were also subjects written about by Peter Drucker during the mid-1970s to early 1980s, as shown in his 1982 book The Changing World of the Executive.

While Drucker contributed to many publications on a regular basis, and published a number of collections of his writings, as I wrote about last year in my post “Peter Drucker: Freelance Writer,” this anthology came primarily from his columns written for the Wall Street Journal between 1975 and 1981. 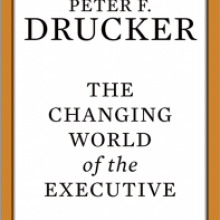 Although the original book had gone out of print, The Changing World of the Executive was reissued in 2010 by Harvard Business Review Press, as part of its series “The Drucker Library.”  Drucker divides the book into five sections: Executive Agenda, Business Performance, The Non-Profit Sector, People at Work, and the Changing Globe.

He writes a brief introduction to each section. For instance, from the intro to People at Work: “The phrase 'people are our only resource' has been a management slogan for at least eighty years. But far too few executives really look at this resource.”

A major topic is retirement policy. Drucker was 72 when the book was published, and all of the pieces were written after he turned 65. (He, of course, never retired and lived to be 95.) It was also a time in which he demonstrated astonishing publishing productivity.

Besides a steady stream of articles, in 1980 came a book of new material, Managing in Turbulent Times, followed by the collection Toward the Next Economics and Other Essays the next year, then The Changing World of the Executive. And later in 1982 came his first of two novels, The Last of All Possible Worlds. Although it, too, went out of print, it was reissued last year along with his second and final novel, 1984’s The Temptation to Do Good, in one volume by Paul Dry Books.

Many of the issues in this book, as noted above, remain with us. In the 1980 essay “The 'Re-Industrialization' of America,” we read the following: “Demographic pressures are so great and so irreversible that they will render futile any policy that tries to maintain traditional blue-collar employment in the traditional manufacturing plant.”

While not everything in The Changing World of the Executive is prescient or on-target, he was eerily correct and well ahead of his time in another 1980 essay, “The Information Explosion,” in which he writes that with the growing use of desktop computers in business, “…the manager risks being overloaded with paper and data. Indeed, the critical problem will not be how to get or how to process the information, but rather to define what information really is.”

And later in the same essay:  “Managers will also have to come to grips with some critical questions about the role of information in their organizations. Who shall have access to what information? How can information be protected against fraud, industrial espionage, or prying and gossip-mongering? How can personal privacy be guarded?” To which we can add another question:

Would Drucker be particularly surprised that we are grappling with these same questions so many years after he wrote his essay?