"Concentration is the key to economic results… Economic results require managers concentrate their efforts on the smallest number of products, product lines, services, customers, markets, distributive channels, end-uses, and so on, that will produce the largest amount of revenue." —Peter F. Drucker 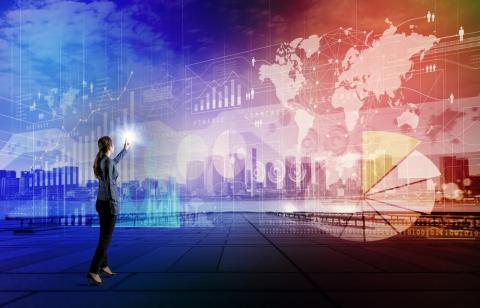 To dominate you have to concentrate. No easy task.

Every executive must understand the principles and practices related to abandoning the unproductive and the obsolete in order to free up time, monies, and people to concentrate on activities that produce significant results.

For knowledge workers, focused attention is what gets work done. Multitasking, or simultaneously splitting one's attention across many tasks, has become an all-too-common résumé boost.

Psychologists Daniel Kahneman, a Nobel Prize winner in economics, and Amos Tversky studied why people make the same kinds of irrational mistakes over and over again. “We study natural stupidity,” Tversky once quipped.

Many people erroneously believe that doing multiple things at once makes them more efficient. Multitasking is a classic example of irrational thinking or a misguided mindset.

No other principle of management effectiveness is violated as constantly as the principle of concentration. The point? Every knowledge worker has to concentrate on the fewest number of activities that produce the maximum results.

This article presents a powerful thought process that helps improve both individual and organizational productivity.

Peter F. Drucker’s teachings on effective management centered on the interrelationship among three distinct concepts: abandonment, concentration, and Pareto's Law (a.k.a. the 80/20 Principle).

Abandonment and concentration, Drucker reminded us, are opposite sides of the same coin. Simply put, abandoning unproductive and obsolete activities frees up resources/time to concentrate on the result areas.

However, deciding what to abandon is never easy. We all need a framework or methodology to help us decide what we should stop doing and pinpoint areas where we should concentrate our efforts and resources.

Pareto analysis is one of many diagnostic tools used to identify activities, programs, products, distributive channels, services, and all forms of time wasters that should be considered candidates for abandonment/de-emphasis.

One of the best books ever written about the Pareto Principle is Richard Koch's The 80/20 Principle.

It details how a systematic and predictable lack of balance appears in data relating to life and business.

Here's an excerpt from Koch's book:

So What Did Pareto Discover?

According to Koch: "He happened to be looking at patterns of wealth and income in 19th-century England. He found that most income and wealth went to a minority of the people in his samples."

This pattern of imbalance was repeated consistently whenever he looked at data, regardless of time period or country.

The Far-Reaching Applications of Pareto's Discovery

It took many years for others to discover that Pareto's finding could be extended to all kinds of resources (e.g., people, capital employed, crucial physical assets, and organizational knowledge).

In most situations, a pattern of imbalance with respect to efforts and results is a near certainty.

In 1949 [Harvard professor George] Zipf discovered the “Principle of Least Effort,” which was actually a rediscovery and elaboration of Pareto’s principle.

Zipf’s principle said that resources (people, goods, time, skills or anything else that is productive) tended to arrange themselves so as to minimize work, so that approximately 20-30 percent of any resource accounted for 70-80 percent of the activity related to that resource.

What Does This Really Mean?

We suggest reading the above paragraph again. Simply put, it means more results can be squeezed out of existing resources—guaranteed!

Stated differently:  It's a good bet that your organization's most valuable resources are not as productive as they could be.

Drucker provided an excellent example of how nurses in a major hospital were asked a few questions in an employee survey:

The nurses were sharply divided as to what their task was, with one group saying “patient care” and another saying “satisfying physicians.” However, they were in complete agreement on the things that made them unproductive.

All—nearly all—of these could be turned over to a non-nurse floor clerk, [who is] paid a fraction of a nurse’s pay.

The productivity of the nurses on the floor immediately more than doubled, as measured by the time at the patients’ bedsides.

Patient satisfaction more than doubled and turnover of nurses (which had been catastrophically high) almost disappeared—all within four months.

The point? Resources have a tendency to decline in productivity. But, as Drucker so clearly illustrates, the way to get more output from existing resources is to make the resource "work smarter."

It’s management’s job to make resources more productive. In the nursing example, a workplace survey revealed that a large percentage of the nurses' time was spent in non-nursing activities.

Similarly, the majority of department stores require Christmas wrappings to be done in a separate section with people assigned to do the task; this frees up salespeople to do more selling.

Zipf's principle always proves valid. This means we have to constantly improve the productivity of resources in existing workplaces.

Said Drucker: "We know that we need to work on the productivity of each of the factors of production: capital, crucial physical assets, natural resources, time, and knowledge."

Why? Because it's near certain that the efforts-to-results ratio with respect to most resources is predictably unbalanced.

Because it’s near certain that most efforts don’t eke out the same results, regardless of how many resources are poured into it.

The Productivity-Improvement Job of Management

Bottom line: "Resources are made productive—or deprived of productivity—by individual managers within their own individual sphere of responsibility."

The other pioneer of the 80/20 Principle was the quality guru Joseph M. Juran. Indeed, he coined the phrases "Pareto Principle" and the "Rule of the Vital Few and Trivial Many."

According to Juran, in any relevant data set, a small number of elements will be responsible for majority of results.

In terms of results, the vital few within the data set will always take precedence over the trivial many.

Examples of the Vital Few and the Trivial Many

The conclusion? Efforts should be concentrated on the one reason causing the majority of complaints.

Another example: While a manufacturer makes 20 different products, five of those products account for 75 percent of its customers’ complaints.

And still another example: While there may be 12 distinct steps in the process of transferring a patient out of an intensive care unit into a standard bed, two of those steps account for 82 percent of the total time in the total process.

7-Eleven's Colossal Success Is Based on the Pareto Principle

The success stories of 7-Eleven and other convenience stores around the world are based on the application of Pareto's principle.

The typical supermarket has over 10,000 items, but only a small percentage of these products contribute significantly to economic results.

The entrepreneurs of the convenience stores selected only the top 200 or so revenue producing items.

As a result, they were able to build lucrative businesses with a percentage of profit on sales far exceeding the average supermarket.

Simply put, 80 percent of a typical supermarket's profits is derived from 20 percent of the products sold.

By concentrating on a handful of rapid turnover items and appropriate positioning strategies, a growth industry was born.

Always look for the predictable imbalance. Break down the numbers. Disaggregate the data.

This will enable you to spot the important things.

Drucker's Summary of the Pareto Principle

Drucker repeatedly demonstrated how Pareto's Law could be used in diagnosing patterns of potential misallocation of resources.

Business enterprise is not a phenomenon of nature but one of society. In a social situation, however, events are not distributed according to a ‘normal distribution’ of a natural universe...

In a social situation, a very small number of events at one extreme—the first 10 percent to 20 percent at most—account for 90 percent of all results; whereas the great majority of the events account for 10 percent or so of the results.

It is true of sales efforts: A few salespeople out of several hundred always produce two-thirds of all new business. It is true in the plant: A handful of production runs account for most of the tonnage.

It is true in research: The same few people in the laboratory are apt to produce nearly all the important innovations.

It holds true for practically all personnel problems: The bulk of grievances always comes from one group of employees (for example, from the older, married women, or from the clean-up people on the night shift), as does the great bulk of absenteeism, of turnover, of suggestions under a suggestion system, and accidents.

It's a near certainty that there's an imbalance present between efforts and results.

Every manager, to be effective, must assume an imbalance exists with respect to resource allocation—and must work hard to incrementally change the ratio.

The key is to alter the ratio between effort and results.

Economic results, Drucker reminded us, require efforts be concentrated on the few activities that are capable of producing significant business results.

In making a distinction between the vital few and the trivial many, management can improve its asset management by making its capital work more effectively.

The more the Pareto Principle is explored, the greater the relevance to improving the productivity of all resources.