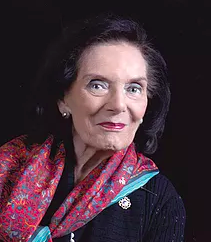 Mrs. Hesselbein was awarded the Presidential Medal of Freedom, the United States of America’s highest civilian honor, by President Clinton in 1998 for her leadership as CEO of Girl Scouts of the U.S.A. from 1976–1990, as well as her service as “a pioneer for women, volunteerism, diversity and opportunity.” Her contributions were also recognized by the first President Bush, who appointed her to two Presidential Commissions on National and Community Service. From 2009–2011, Mrs. Hesselbein served as the Class of 1951 Chair for the Study of Leadership at the United States Military Academy at West Point, in the Department of Behavioral Sciences and Leadership.

She was the first woman, and the first non-graduate to serve in this chair. Also in 2009, the University of Pittsburgh introduced The Hesselbein Global Academy for Student Leadership and Civic Engagement. The Academy’s aim is to produce experienced and ethical leaders who will address critical national and international issues and advance positive social and economic initiatives throughout the world. Mrs. Hesselbein serves on many nonprofit and private sector corporate boards, including Mutual of America Life Insurance Company, the Bright China Social Fund, California Institute of Advanced Management, and Teachers College, Columbia University Presidents Advisory Council.

She served as the Chairman of the National Board of Directors for Volunteers of America from 2002–2006. In December 2013 Volunteers of America honored Mrs. Hesselbein with the Maud Ballington Booth Legacy Award for a lifetime of pioneering social change. For her exceptional work and her continued commitment to developing leaders of all ages, as demonstrated in her work with the Hesselbein Institute, Mrs. Hesselbein has been awarded Lifetime Achievement Awards from ATHENA International, Best Practice Institute, the Girl Scout Council of Greater New York, and the International Leadership Association.